For Cameroon, the game against Nigeria could be a springboard for coach Toni Conceicao to impress (contract ends September 2021) after two dismal games against Cape Verde and Rwanda in March. It will also be redemption for the players of the Indomitable who haven’t presented positive figures against arch-rivals Nigeria in their previous games across all competitions. They face each other twice in Austria.

Several African national teams will be involved in international friendlies this month, to warm up for the rescheduled 2022 FIFA World Cup qualifiers in September.

There are a good number of matches to watch out for, notably the Cameroon and Nigeria double header. There are other interesting pairings including the Senegal vs Zambia clash and the Algeria vs Mali cracker. A majority of these nations have qualified for the next year’s Nations Cup finals in Cameroon and are aiming to begin the group stage of the World Cup qualifiers.

Defending champions Algeria have programmed three friendly games against Mauritania, Mali and Tunisia. The Desert Foxes are unbeaten in their last 24 games. Ghana, Ivory Coast and Uganda will also be in action.

There will also be a huge duel between two of the continent’s finest players when Senegal of Sadio Mane faces Zambia’s super-star Patson Daka.

A ban on several stadia across the continent hit the opening rounds of Africa’s World Cup qualifiers in June which have been postponed to September 2021.

This comes after the Confederation of African Football (Caf) sent out a circular to member associations that included a list of approved stadia for the first two rounds of group matches.

Those affected include Senegal, who competed at the last World Cup in Russia in 2018, and Mali, who were among the top seeded teams for the preliminaries.

Burkina Faso, the Central African Republic, Liberia, Malawi, Mali, Namibia, Niger and Sierra Leone have all not had their home stadiums approved as Caf cracks down on poor infrastructure around the continent.

African football has long been blighted by poor stadium facilities and sub-standard pitches and Caf have steadily shown more resolve in banning venues.

“The CAF recommends to use this outage period to improve game stadiums and other facilities at your respective sites as far as possible.” Reads a note dated July 26 2020.

“Quality stadiums are fundamental for the development and progress of African football. Several aspects must be thoroughly evaluated in African stadia. Related to the pitch, floodlights, comfort safety and security of the spectators, players, officials, media and marketing facilities, and other areas.” Continues the note from CAF.

Furthermore, “when a stadium in one country does not meet the requirements, its national team and/or clubs may be required to play their matches in the approved stadium in another country.”

But in March 2020, a similar ban on several stadia across the continent for the last round of Africa Cup of Nations qualifiers was lifted at the last minute. Caf gave no explanation for the change of heart.

It is worth mentioning that Caf recently accredited five of Cameroon’s stadia to host the qualifying games.

The dates of the qualifiers were recently moved from June to the existing FIFA windows of September, October and November 2021, and March 2022.

Cameroon was looking for quality teams to engage the Indomitable Lions in friendly games so as to make use of the FIFA window which runs from May 31 to June 15, 2021.

The double-header will take place at the Weiner Neustadt Stadium and it was planned to prepare Antonio Conceicao’s side for the 2022 World Cup qualifiers that will begin in September and next year’s Africa Cup of Nations tournament that will be held in Cameroon.

Nigeria coach Gernot Rohr said the long rivalry between the Super Eagles and Cameroon’s Indomitable Lions would yet again come to the fore when the continental arch-rivals clash in an international friendly on 4 June at the Weiner Neustadt Stadium in Vienna, Austria. 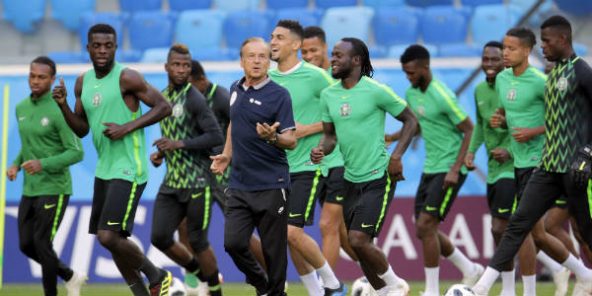 Rohr said it becomes imperative to keep his wards in shape, following the postponement of the first and second matchdays of the Qatar 2022 FIFA World Cup qualifiers, adding that Cameroon is an ideal fixture to bring out the best in his side.

“This friendly against Cameroon is an interesting game because we are going to have some of the new players, since some of our regular players will not be available due to injuries, and it is not easy to have everybody at this period because it is also the offseason period,” Rohr told CAFOnline.com.

“It is a big test game and an opportunity to test the new players,” added the German coach.

“Of course, we are not going to play for the result against Cameroon in Austria, but it’s an opportunity to see our boys and see something different with our systems against a very good team that will host the next AFCON,” Rohr, who will turn 68 on June 28th further told CAFOnline.com.

“It is true that we beat them in the Russia 2018 World Cup qualifiers and at the last AFCON in a very interesting game of the Round of 16, but this friendly is going to be different. I’ve seen that they have a list of 28 players, but I’m hopeful all our players listed would be able to come for the match. I hope we are going to have a good weather in Vienna for this match,” he added.

The national team coach Gernot Rohr has not been paid by the Nigeria Football Federation (NFF) for more than six months.

The national team players’ have not been paid bonuses and allowances in full, while goalkeeper trainer Alloy Agu is demanding over 17 months in salary.

“I think now, with all the injuries, it is hard for many of us to make the sacrifice to come and play a meaningless friendly when the outstanding bonuses have not been paid.” Says an anonymous Super Eagles player during an interview with ESPN Africa.

He said: “The players are not happy. They have not paid bonuses or allowances, nothing at all for the entire AFCON Qualifiers.”

“It is better for us to stay away, recover properly, rest and get ready for the new season and the World Cup qualifiers.”

For Rohr, this presents a major logistical challenge, as he scrambles to make up a squad of 18 before the match, though has attested that all the medical withdrawals are legitimate.

But that is not even as bad as it gets for Rohr. To make up for the absentee players, Rohr called up some fresh ones as replacements. Valentine Ozornwafor from Galatasaray, Samson Tijani from RB Salzburg and Frank Onyeka from Midtylland, among others.

Cameroon have opened their national team camp in Austria ahead of their international friendly matches against Nigeria on Friday, June 4 and later June 8.

The five-time Afcon winners are camped at Hilton Vienna Danube Waterfront in the Austrian capital and some players have already arrived.

In the Cameroonian squad, three players are missing. They are Jean Onana, Christian Bassogog and Olivier Mbaïzo. The first one plays for the Belgian club Royal Excel Mouscron. The 21-year-old midfielder is injured and will therefore not honour his third call-up to the Cameroon national team. He will be replaced by his club teammate, Serge Tabekou. The striker Christian Bassogog could not be released by his club, Shanghai Shenhua (China). While the defender of Philadelphia Union (USA), Olivier Mbaïzo has not obtained a visa for Austria.

CAF recently released a circular to member associations to crack down on what it sees as substandard stadium infrastructure across the continent by ruling that 20 of its 54-member associations cannot use their main facilities to host international games.

Some of the reasons cited by CAF for the removal of stadium accreditation include substandard pitches, lack of fixed seating for fans and “poor and inadequate” dugout areas. The reason to play a double friendly out of the continent does not hold in the case of Nigeria vs Cameroon because both teams have 9 accredited stadia between them.

Another excuse from Cameroon’s FA to organise the friendly in Austria is the proximity of the European continent to most of the players called up.

Because the withdrawals from both teams came so late, there is no chance of getting players from the local domestic leagues to compensate for the personnel deficits, as they would require at least 10 days to secure entry visas.

“I think they made this friendly in Austria to give us a good condition for preparation, but I see that it is difficult to motivate the players to come to Europe because some of the players are in Nigeria already. And they have to come back to Europe to play.” Rohr complained.

COVID-19 has been used as another excuse but it is worth noting that, Austria’s football team was granted a special dispensation from their government to return to Vienna after their June 2 friendly against England and avoid new restrictions on travel imposed by the Austrian government recently.

A country hosting a major tournament on its soil was supposed to use such games given the geographic proximity between the two countries to adequately prepare for the show piece event in January 2022 by using a minimum of fans in the stadium with an imposed bubble on officials and players, while testing its readiness for the upcoming competition.

[Ghana] My Responsibility Is To Give Football The Support It Deserves- President Nana Akufo Addo.