LIVE: Follow all the action right here as Chelsea take on Club América at Allegiant Stadium in their first pre-season friendly of the summer CLICK HERE TO READ MORE ON www.football.london

Alexandra Popp, making up for lost time after missing the last two Women’s Euros with injury, became the first Germany player to score in all three group games of this event as her header helped Martina Voss-Tecklenburg’s side extend their 100% start to this tournament with a predictably comfortable win over Finland. In the knockout […]

From Brentford Community Stadium – Spain will face England in the quarter-finals of Euro 2022 after a 1-0 win over Denmark secured second place in Group B. The Danes needed all three points in order to pip La Roja to the knockout stages, but ultimately didn’t trouble Spain enough when the going got tough and […] Everton have made Chelsea striker Armando Broja their No. 1 priority attacking target for the summer but will face difficulties in signing him. According to The Athletic, Chelsea youngster Armando Broja has become Everton’s top target in the ongoing transfer window as they look to make a new attacking signing. Broja is back at Chelsea after […]

Harry Maguire has retained the captaincy at Man United but many are still unconvinced by his role after a disastrous season. CLICK HERE TO READ MORE ON www.manchestereveningnews.co.uk 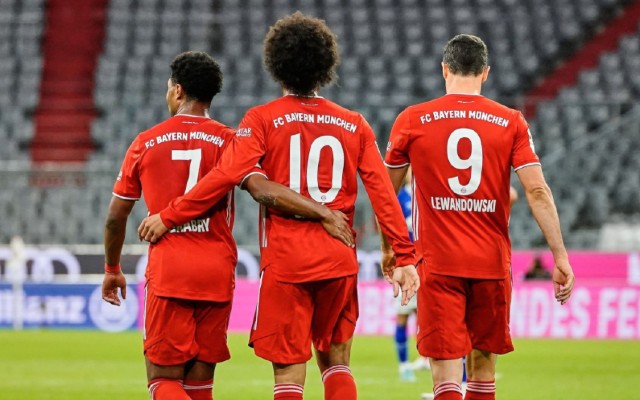 Bayern Munich have officially announced that Serge Gnabry has signed a new deal amid interest from Chelsea. Gnabry had been linked with a move to Chelsea in recent weeks, according to journalist Simon Phillips, who claimed that Gnabry was a possible option for them this window. The German winger’s contract was set to expire next […]

The Gunners team has been announced for their first preseason friendly of the summer at the M&T Bank stadium in Baltimore CLICK HERE TO READ MORE ON www.football.london

There were twenty-five seconds remaining when at last the nerves fell away and they knew. Marta Cardona leapt at the far post to meet Olga Carmona’s cross, guiding a header into the net and Spain into the quarter-final, substitutes and staff liberated and streaming from the bench to greet her. It had been edgy and […]

Philadelphia Union sporting director Ernst Tanner has been fined an undisclosed amount after being found to be in violation of MLS’ public criticism policy, the league announced Saturday. The fine relates to comments Tanner made regarding LAFC‘s signings of Gareth Bale and Giorgio Chiellini on TAM deals, rather than the Wales and Italy internationals taking […]