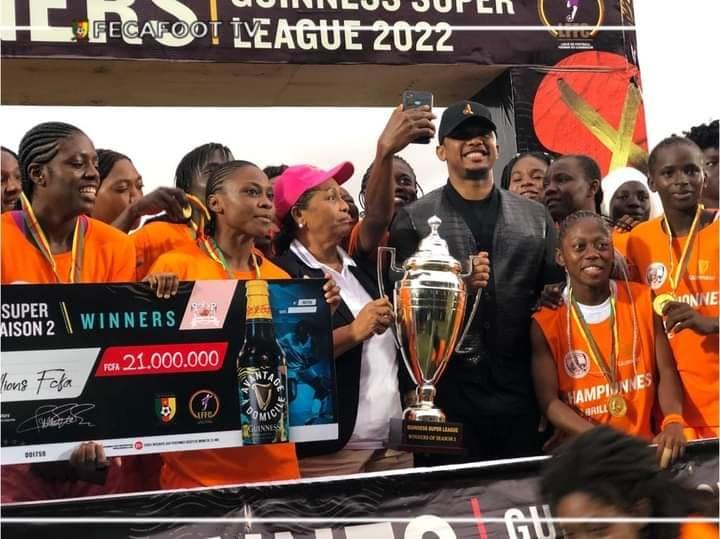 The curtains have been drawn down season 2 of the Guinness Super League with Awa FC retaining their throne of champions of Cameroon for the second consecutive time after beating runner’s up Amazones FAP 2-3 at the Stade Annexe N°1 Omnisport stadium of Yaounde.

The last Guinnessico pitting Amazones FAP to AWA FC was a crowd puller as two of the best teams of the women top flight faced each other at the Yaounde annex 1 stadium in the presence of Fecafoot’s president Samuel Eto’o and president of the women’s professional league, Mme Celine Eko among a good number of other personalities present.
This exciting fixture began with a friendly show of former indomitable lionesses who warmth up the stadium before the grand finale.
AWA FC remained irresistible as they opened scores as early as at the 6th minute through Farida Machia. Bongben Confidence got the equalizer at the 19th minute but the celebration was short leave as Raissa Ebenye through a beautiful volley gave the advantage to AWA before half time.
Guinness Cameroon offered a surprise package at half-time as Cameroon’s top musician RINYU performed to the delight of the thousands of fans who made it to the Yaounde annex 1 stadium.
The second half of the game was as animated as the 1st with AWA dominating and scoring a 3rd goal by Brenda Tabe who intercepted a poor pass to the goalkeeper to make it 1-3 for AWA FC. The Amazone ladies bounced back through a 25m shot from Wanki Rita that hit the top corner before ending in the back of the net. A goal that will propel her to end up as the 22nd and final Woman of Guinnessico of the season.
The closing ceremony was rich in colours with trophies being awarded to various players and teams.

Lessons learnt from Season 2 of the Guinness Super League

One of the Lessons to take home from this season’s football is the great leap forward in terms of organization. The Guinness Super League was one of the best, if not the best, competition organized this season. Matches went on interrupted at a rhythm of a game played every 3/4 days.  The organizers should think of a better setup to take the championship on a weekly basis.
–AWA FC remained unstoppable.
AWA FC through its preseason campagne and recruitments in the likes of Kevine Ossol and Lamine Mana had the best squad in the championship.
From Marthe Ongmahan in th goal post, through Moumazim in the defence, Raissa Ebenye and Tantoh Melvis at the midfield, Frida Machia, Brenda Tabe, Lamine Mana and Kevine Ossol were well-fed upfront, scoring a total record of 66 goals and are creating another record of the team with the highest number of points clinched in a single season(58 points).
AWA equally goes home with the golden boot as Lamine Mana ends up best goalscorer of the season with 19 goals scored ahead of runner’s up Cissé Kibinde who scored 17 while Eliane Bibout and Flora Kameni close the top goalscorer chart with 16 goals each.
The BIG FOUR dictate their law
Another lesson would be the respect of hierarchy in the Guinness Super League with the “Big four” keeping the top 4 places; Awa champion, Amazones Vice champion, Eclair of Sa’a in 3rd position and Louves Minproff ending up 4th.
The others coming in any order. The women top flight is thus divided into two folds (the top four hosting the best talents and the last 8 with Vision sports of Bamenda and Renaissance de Figil relegated into the regional leagues. These last two faced difficulties in terms of organization and environment that disfavoured their capacity to remain into the top flight.
The last lesson could also be the performance of newcomers into the championship. Lekie FF and Authentic Ladies who ended up 8th and 9th respectively after creating sensations all through the season.
#BlackBrilleDansTout #BlackShinesBrightest #FootballIsAllOfUs #LeFootCestNousTous #Guinnessico #Fecafoot #LFFC #Guinness #GuinnessSuperLeague